C.S. Lewis, in his book "Mere Christianity," said this about Jesus: "A man who was merely a man and said the sort of things Jesus said would not be a great moral teacher. He would either be a lunatic - on the level with a man who says he is a poached egg - or he would be the devil of hell. You must take your choice. Either this was, and is, the Son of God, or else a madman or something worse. You can shut him up for a fool or you can fall at his feet and call him Lord and God. But let us not come with any patronising nonsense about his being a great human teacher. He has not left that open to us." 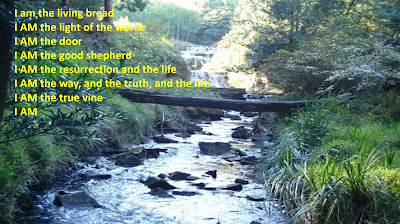 The seven I am sayings of Jesus:
Up to v.34 although they ask for a sign, the “Jews” are enthusiastic and want “this bread”, but from that point onwards it was an upward struggle for Jesus to convince them that he was the Messiah.


What Jesus was saying was scandalous to them and seems to have been interpreted as cannibalism. These were veiled statements with regard to Jesus' sacrifice on the cross, and they simply misinterpreted his words. The statements were not about the Eucharist - formalised a long time after.

This is really the crux of the matter, either He is who he says he is or he’s a liar, etc!

In a film based on Ernest Hemmingway's story, "The Snows of Kilimanjaro" there’s a scene in which two men discuss the difficulty of finding meaningful goals in life. Both are hunters, both of them know what it is to pursue something, yet neither has found what will really satisfies.

One man tells of an incident, which provides the theme of the story. One day while he was high above the snow line of Mt. Kilimanjaro he found the remains of a leopard, frozen to death in that most unlikely place. The two speculate about what the leopard was doing at that high altitude and conclude that whatever it was, the leopard was seeking the wrong thing, in the wrong place, at the wrong time, and it destroyed him.

The implication is that this is the way it is for humans as well: we aspire to something, pursue it and if it is the wrong thing, or if it is sought in the wrong way, it leads to destruction.

It must be obvious as we consider the seven “I am” sayings of Jesus that in him we will find what we need.

Consider: He is the doorway to life, he offers bread, light, the way, the truth and the life. He is the good shepherd! He is the vine and we are the branches and at the end of life there is the resurrection.

Years ago, Harry Emerson Fosdick was a tourist in the Middle East. He was invited to give an address at the American University in Beirut, Lebanon, where the student body comprised people from many countries and sixteen different religions. What could one say that would be relevant or of interest to so mixed and varied a group? This is how Fosdick began: "I do not ask anyone here to change their religion; but I do ask all of you to face up to this question: What is your religion doing to your character?"

This was a call to consider one of the great issues of religion, of belief, of life, and ultimately of Christian character. Emerson once said, "What you are speaks so loudly I cannot hear a word you say." Jesus said, "The words that I have spoken to you are spirit and life." By this he meant that those who appropriated his spirit, i.e., fed upon him as the bread of life, would find, thereby, a fulfilment and satisfaction no other means could give.

We find our life and satisfaction in Jesus the Christ!