As we are profiling some of the amazing members of our small congregation, this time we are casting the spotlight on Peter Smooi. 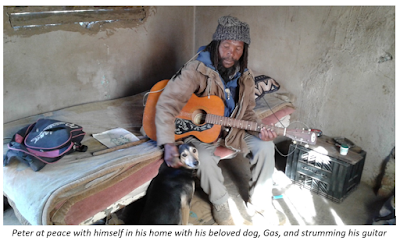 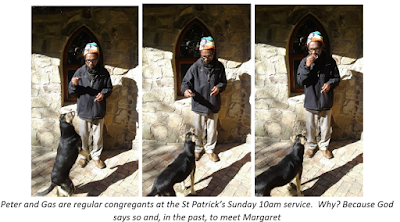 Peter Smooi is one of the characters of Hogsback. He is recognisable in the community with a smile on his face, standing on the pavement selling mushrooms or walking sticks or walking with his dog by his side and his guitar slung across his shoulder.  He is a man of peace and of Africa and identifies with Rastafarianism.  He is a deep-thinker and has interesting viewpoints.

Peter’s heritage is truly in the Amathole mountains where his family has lived for many generations. He was born at Daneswold in 1964. His parents lived in Hogsback, although his father came from the Kat valley. Peter has inherited characteristics from his Khoi grandfather who worked on a farm nearby. Although he grew up in Hogsback, he went to school in Alice up to Std 3 and then he worked in gardens and factories in many places including travelling to Cape Town to work in a factory. He has two children: Yoliswa born in 1984 and Anelisa born in 1990.

Since Peter’s daughters have left him, he lives on his own. A typical day in the life of Peter is to get up in the morning, have a cup of tea or coffee, and then walk into the forest to search for mushrooms in the summer, particularly under pine, oak and wattle trees. He will collect them and carry them to the village to sell them. The most popular mushrooms are the Bolitha and pine ring mushrooms. He also looks for suitable black wattle stems to make walking sticks to sell to visitors. The inscribed walking sticks have become a trade mark of the pavement sellers who congregate on the pavement opposite the hardware store and the shop. Many hotels buy them in bulk to sell as souvenirs. The other special trademark of the pavement sellers is the making and selling of clay cattle, hogs, horses and the chapel which they make from the local clay.  It is in this way that income is derived to buy pap and bread. One can imagine that there must be some days of no sales and therefore no food. And yet, even though Peter has so little, he will share what he has with Gas.

Jikani, which opened on 25 January 2014, has played a, invaluable role in many ways including supplying clothes to those who cannot afford expensive clothes. On Sundays Peter and Gas make the longer walk to St Patrick’s where they are regular members of the congregation. 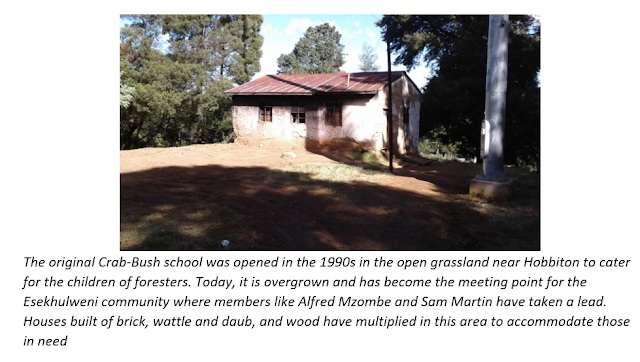 Even though Peter does not have many material goods, what he has he shares with his dog, Gas. Peter is an example of how one can live on little.  His life makes one feel humble as it shows that material goods that are so sought after by society are not the essential priorities. In many ways these St Patrick’s profiles make one appreciate some of the great messages of Jesus Christ, to see Christ in others, to be humble in oneself and to be kind to one’s neighbour, especially if he or she is in need.

In admiration to all those at Hogsback who walk tall even with so little!