The Amatola Mountains (word meaning small cattle) have a mystical attraction owing to the beautiful natural surroundings of forests, mountains and waterfalls with plentiful rainfall (about 1 200mm a year) which provides the sources of the four main Eastern Cape rivers – Fish, Keiskamma, Buffalo, Kei. The three Hogsback peaks (named after the geographical feature of steep ridges) are 1 936 m above sea level. From earliest time firstly the San, then AmaXhosa and after the 8th Frontier War/War of Dispossession (1850-53) white colonists, came to the Amatola Mountains for spiritual solace.

The San left behind their unique rock paintings, AmaXhosa collected red clay with which to paint themselves and sent their cattle for winter grazing, and the colonists established a holiday village after hunters shot the plentiful game especially on the Bontebok Flats near Ngqika’s Kop, and woodsmen sawed down the huge indigenous hardwoods like the yellow-wood. What must not be forgotten is that this territory was highly contested, three wars from 1834 – 1853, were fought between the British imperial army and Amaxhosa tribesmen resulting in the conquest and oppression of the indigenous people until the South African independence in 1994. Still, today, the consequences are a skewed social and economic balance between black and white.

It was in the Hogsback valleys – Tyhume, Kat and Keiskamma rivers - where the mission stations of Lovedale (Presbyterian), Healdtown (Methodist) and St Matthew’s (Anglican) educated blacks with ideas of democracy, equality and civil rights which strengthened the struggle against colonialism and Apartheid. It is appropriate that many of the leaders of the ANC were schooled at these missions including the first President of South Africa, Nelson Mandela. The oldest building is the Hogsback Inn which was the first hotel in the 1850’s built on a bend of the Tyhume River (where we worshipped during building operations). The early holiday makers were the local missionaries from Lovedale and Healdtown who would come up to the mountain to escape the heat of the valley in summer and spend Christmas here. They would travel up by ox-wagon and stay for a month or so in summer. They introduced the Oak Avenue service, a public open-air Christmas service, started beautiful gardens with hydrangeas, azaleas, silver birches, etc, climbed the mountains, gardened, socialized and observed the unique diversity of butterflies, frogs and other creatures. Originally they camped and then built wattle and daub houses from the local materials of mud, manure, poles and grass. 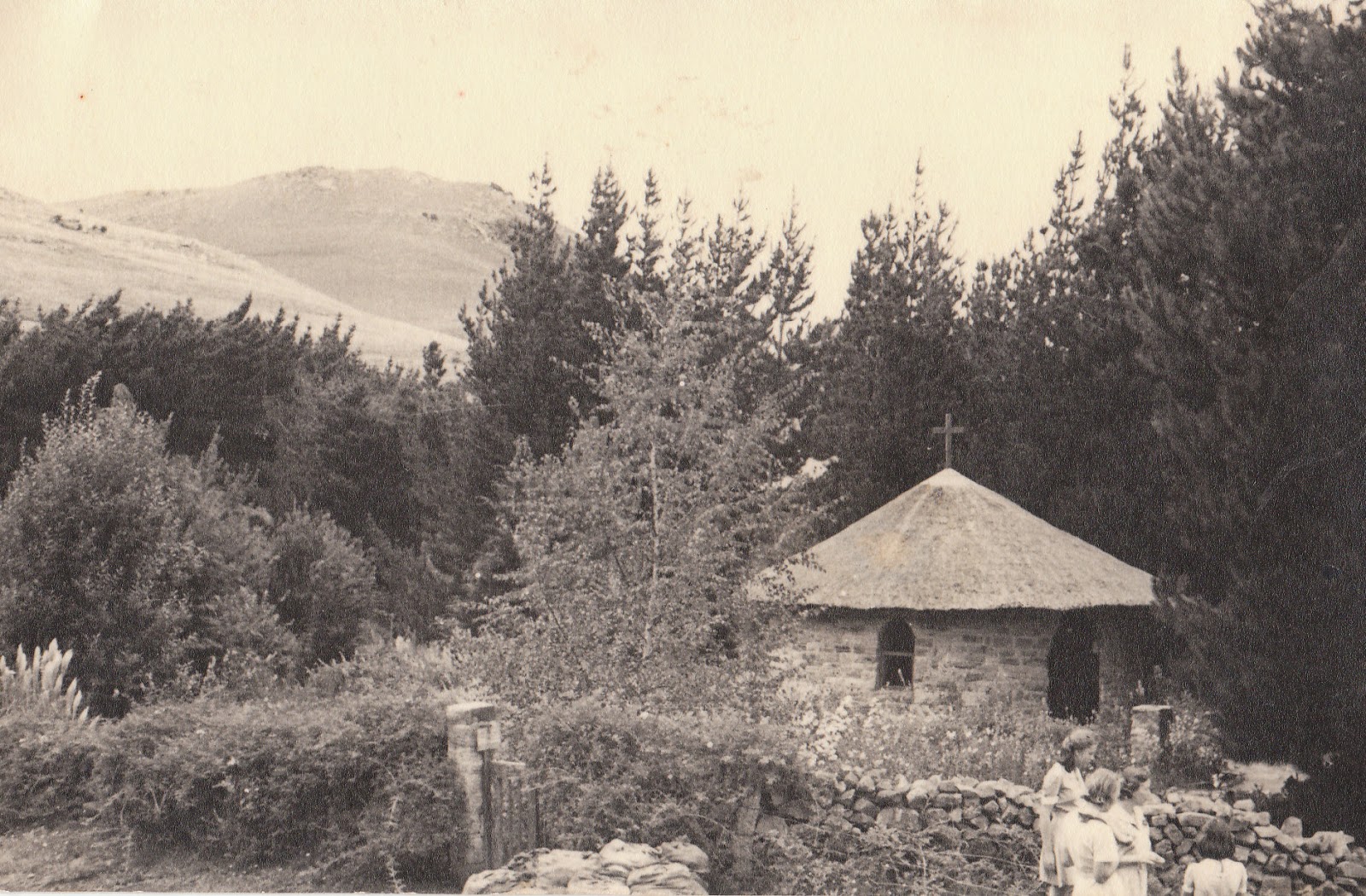 The Hobart Houghtons were Anglicans from Ireland who emigrated to teach at the Lovedale mission in 1903. The Principal, James Stewart whose memorial stands on the hill outside Alice, was a friend of the legendary Dr David Livingstone. They built a holiday home in the 1920’s named Innisfree (after WHYeats’s poem capturing rural beauty and serenity). There was an increase in holiday makers when the pass to Hogsback was built in 1932.

In 1935 Kenneth Hobart Houghton commissioned a local resident, Bert Summerton, to build a chapel for his wife, Cherrie – a plaque in the foyer commemorates their role. Summerton was the son of the original resident of Hogsback, Thomas Summerton. He and his brother married two sisters, both Xhosa ladies. Apartheid laws did not approve of the progeny of these “mixed” families being in a “white” area. Thomas owned Cherry Orchard where he farmed apples and other deciduous fruit using furrows from the stream to irrigate his lands. He struggled to get to a market as he had to travel by donkey cart to Bloemfontein, over 400 kms away.


The chapel was dedicated to the patron saint of Ireland, St Patrick. The sundial in the garden is dated 1687, the year of the Declaration of Indulgence, when James ll permitted freedom of religious observance. From the start the community used the chapel. Monica and Greg Wilson were the first to be married in 1935 – she became a reknowned anthropologist. Then Desmond Hobart Houghton, and then my parents in 1939. I was the first to be baptized in 1941.

The Chapel donated to the Anglican Church in 1963

The chapel and home, Innisfree, were donated to the Diocese of Grahamstown in 1963. The house became a retreat for Anglican priests until a fire burnt it down and then it was sold. The Chapel services were open to all but originally Anglican practices dominated. The Methodists and Presbyterians used the Oak Avenue services to collect finances to build a united church. In 1971 St Patrick’s became a chapelry of Fort Beaufort. Eminent clergymen worshipped here eg Archbishop Selby Taylor and Bishop Leslie Stradling. The minister for many years was Rev. Joe Lister. An Oxford graduate and blind, he first came to Hogsback in 1919 when he was the Presbyterian minister in Alice. His father was the conservator of forests in Kingwilliamstown and responsible for Hogsback. He was very popular and in 1989 when he turned 100 was presented with the citation which is at the back of the chapel by the community.

The chapel was extended by Fred Tyler in 1992 to form two rondavels and take 70 congregants whereas in the past it had taken 12. His plaque is in the foyer. The chapel became more practical as a wedding venue and as a non-denominational church for the community and the Anglican Church relaxed its rules about communion, so St Patrick’s became more truly the Hogsback Church. The monthly services are: two Anglican, one Methodist, one Presbyterian, and one DRC. On 15 December 1989 a tornado broke a cypress tree which fell on the roof. Rev. Dr Bride Dickson was the resident Anglican priest who was murdered in 1999, the belltower was built in memory of her. During this period open-air services were held at Christmas and Easter. Collections were taken for the building of a united church under the auspices of the HUCF. Jamie Stephenson, chairman of the HUCF, realized that there was now no longer a need to build another church so sent all the assets to the Methodist Church for safekeeping. However certain residents gained access to these assets and a 10 year period of controversy ensued which is only now being resolved. Rhenus van Lier built the first Wall of Remembrance. 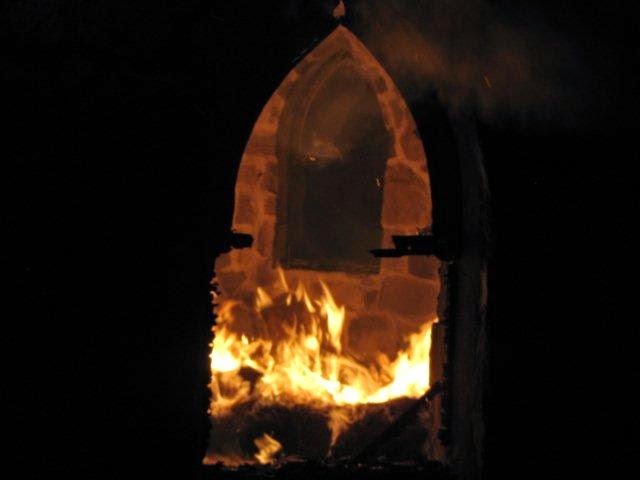 On 17 March 2010 (St Patrick’s Day) the chapel celebrated its 75th Jubilee with a specially-composed Sung Eucharist, a jubilee dinner and the building of a second Wall of Remembrance. Sadly on 20 June that year an electrical fault resulted in the building being burnt to the ground. The whole community stood around that evening helplessly watching this gem being destroyed. Remains from the fire ie the cross above the altar which survived the fire, the security gate at the Wall of Remembrance and the piano sculpture remains in the garden, remind us of the trauma. 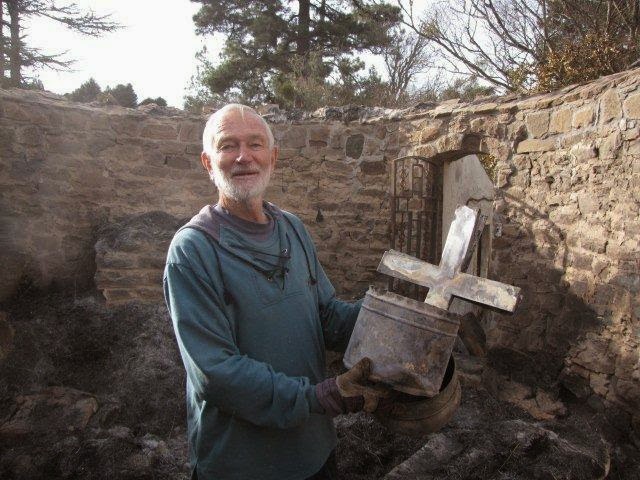 There was wholesale outpouring of love and donations for the re-building of the chapel and Vestry took the decision to maintain its intimacy ie keep the same size; to maintain its quaintness ie thatch, stone and wood; and to maintain its accessibility ie keeping the door open 24 hours of the day every day. The new chapel was built by Fin Weakley with Fritz Klaassen and George Kemp (thatcher) with John Kingsley Hall as architect, in six months so that the Christmas service was held in it. The foyer, vestry and stone “deck” were added. Unique features are the crucifix sculpted out of African hard wood, the cypress flooring donated from local trees, the baptism font which was a Xhosa grinding stone, the Celtic/Hogsback lily symbol sandblasted on the windows and the front door which was an 1820 settler church door made of teak.

The Opening Ceremony on 17 March 2011 (St Patrick’s Day) had Bishop Ebenezer take the Dedication Service remembered by the Foundation Stone, and Archbishop Thabo Makgoba take the Celebration Service which had a heritage element in which the hymns of the early Xhosa Christians were sung remembered by the Commemoration Stone, an excellent Music recital was held and there was a Jubilee Dinner of over 100 supporters. Community residents and visitors from here and overseas all expressed joyous celebration. 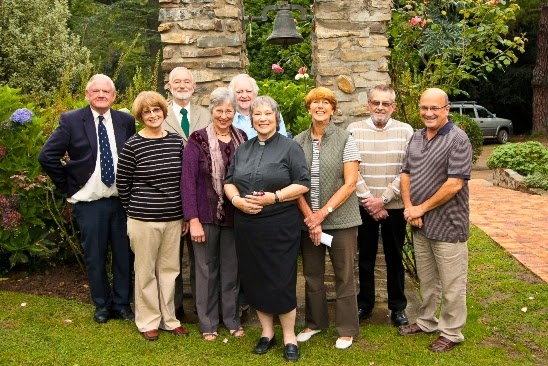 The beautiful garden is being upgraded at the moment. Currently Rev. Margaret Fourie is the resident Anglican priest. The chapel has an active, lively congregation which plays a valuable role in the community; the wider community identifies fully with it; it is a very popular wedding venue (about 30 a year); the chapel is visited throughout the day as a wayside prayer venue and is a top tourist destination in Hogsback.